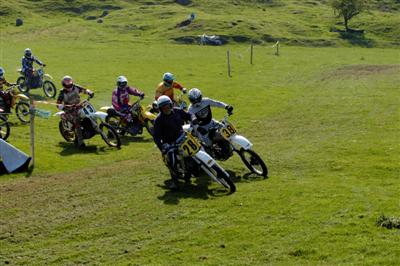 Well folks ,here is another dose of joses dribblings from September in this great wet year of 2017. Never before have we witnessed so much bad weather at our events in the same year, well let,s hope the last round at Glenfarg is better for us on the 8th of October.We will be running a parade lap again as a show of support for our friend and fellow rider Sean Doherty who was badly injured 2 years ago ,Sean will lead the parade on a quad and all riders will be welcome to take part. I am sure it will be well supported and documented on film and DVD by our band of superb photographers and film makers.

The event at Alloa on Sunday went swimmingly well considering the rain we had,last race was off the track at 2-30 .last van pulled out the field at 7-00 pm . Not very good for the guys that had a long wait but what can we do about the weather ,other clubs get the same bother so it is not just a twinshock thing . Big Monty was back from holiday ,he had his big zoomer and his note pad out so the full race report and DVD of the meeting is out now on the club website and in the TMX .He is getting better at the repoting as we wean him back into the twinshock scene but I read his great report and he goes on about something being dusted,well if you saw dust on Sunday Monti youhave better eyesight than me as all I saw was glorious mud.

The new race format seems to be working well no first turn pile ups or any accidents to speak of on Sunday so we will continue in this fashion for the foreseeable future.I got a report of a committee man tampering with the start elastic behind the starters back ,if this happens again whoever is the culprit will be barred from this club as safety and respect are paramount in the club.The secretary (me) makes the race format for every meeting and every rider gets a copy when signing on.The starter is in sole charge of the start of every race so obey both or the consequences could be dire . We had few new faces racing on Sunday and some old timers making a comeback, I hope you all enjoyed your day and maybe come to Glenfarg where hopefully we will have a good dry day where it will be more pleasant for us.I see the mono entry is down we may have to put them in with the over 50s soon if things get much worse, check your format when signing on just to make sure you know the script.

There are still a few dance tickets left so if you want to be there I would advise you to get your tickets at Glenfarg .They are only £15 per adult and are not transferable or refundable as every ticket has to have a name against it for fire regulations .A big Buffett ,A big raffle , A big Dance and A load of trophies to hand out .Your vice chairman, Hoppy has indicated that he would give out the prizes as long as I am there to tell him what to say , I will have to have a good think about that one .

The club memberships are up on 30-10-2017 ,Memberships will be due for renewal at the A.G.M. which is planned for 26th November 2017 .Any items that any member wants put on the Agenda must be with me by 30-10-17 .Anything after this date will be binned .I will be proposing that we do away with a committee as it only causes friction and animosity as was witnessed on Sunday. The club runs fine with senior officials and has done for years.    The Dance on 18th November will go ahead as planned and we are still on the scrounge for raffle prizes .GET YOUR TICKETS SOON AS THERE ARE NOT MANY LEFT .ONLY £15 per adult.We still need all annual trophies returned thanks.

The Team points are as follows and things are on a knife edge and all to play for at Glenfarg .After a good showing in the mud at Alloa the Red Rockets are now in the lead for the first time in history ,it must be said that Hoppies men again scored well but alas all too late in the year for them. Still 4 teams in with chance of winning this great team event .

Howdy folkers on this lovely day in March , such a wonderful time to be writing this page or pages of news for you all to savour while watching corrie or some other pish on tv. Well what a start that was to our season last Sunday at Drumclog. First it is good to report no major injuries but there were a few wee nasties and we hope James Mclean, John Kenny and Dean Rutherford make a quick recovery.While browsing through the thousands of cracking photo,s on F book I came across some of young Ian Harrison and Callum Laid coming to grief in separate incidents ,they looked nasty but from what I gather they both walked away with no major injuries . That is the bad side of our sport now for the good side . I have never seen so many happy people at Drumclog ,a nicely prepared track,a super burger van with very tasty baps, friendly parking attendants,Rick-n-Gaz, gorgeous chicks at the signing on and free coffee at the Mickey Oates stand. Yes it really was a super start to our season ,there was close exciting racing in all the classes but the most enthralling for me was the smallest field on the day ,the Evo class yes great racing all the way down the field but the duo between Jonty and Gav at the front was motocross at its best.Would you believe that only 4 riders went under 2 minutes for a lap on Sunday and 2 of them were on Evo bikes ,I must mention the other 2 as they were flying as well in their class ,day member Aiden Christie and John Adamson who has declared his intention to do the full season with us ,I hope so young man so I can study your lines then dream of what I could have done .I see Monty has a super pre race report on film on his U-Tube channel and the full race meeting DVD will be for sale soon ,they are quite cheap and very good value for money,I will be buying one myself they are that good. The full race report by the big man will be on the club website www.scottishtwinshock.com and in the T.M.X. soon as well.

Parking was a bit of an issue on Sunday ,if we keep an area clear for emergency ,first aid vehicles and race control vehicles ,that is what we expect people to understand and obey, I went to see the timekeeper for 10 minutes and when I returned 3 yes 3 motors parked in a forbidden area .Not only did the race in progress get stopped but the meeting was held up until offending vehicles were moved .Make no mistake I will not hesitate to take this action again or even cancel a meeting because of this selfish action by individuals thinking they can park where ever they like .The First Aid Vehicles must have clear access at all times .While I am on my high horse there better not be any litter left at Drumclog as I hate lazy litter droppers and they will be barred from our events.

The tickets are on sale for our Annual Dance at Alloa Town Hall on the 18th of November 2017, now you might think oh fuck it the noo I will get them later in maybe June or July well they are selling fast and not many left now so if you don,t want to be there just wait till June or July when they will be sold out maybe even May depends on the weather. Only £15 per person not refundable 7-00pm. Till 12-45am ,then it is doon the toon fur a burd of which there is an abundance ,I even think Lee Britton might get a tingle.

The OMNITOOL-RHINO BOILERS TEAM CHALLENGE is carrying on where it left off last year with the Onestop Team out in front . This team underwent a reconstruction during the winter months with 2 of the stars taking a back seat this year but have recruited well with 2 new members scoring in abundance and 1 flopping but I suppose with the new rule that Vice Chairman Hoppy got passed at the A.G.M. where there are now 6 in a team and the worst score is dropped they now have the incentive to not be tagged as a flopper ,it is ironic that Hoppy flopped in his team this time. I was thinking of starting a new monthly flopper list where all the low team scorers got named and shamed , mibby jist mibby next month . Anyway here are the current standings after round one

Just
a wee footnote ,if Brittons Had Talent had entered they would have been running
amock .   See you all at round 2 at sunny
Achnashelloch Farm Lochgilphead on the 23rd April